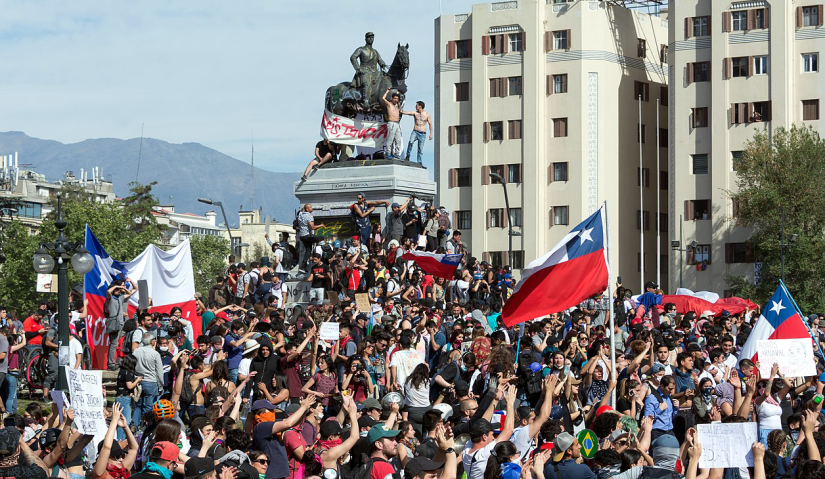 Open letter from cultural workers, artists and organizations in the sector in Chile grouped in Artistic and Cultural Cabildo (forum).

As cultural organizations, we reject and condemn the repeated human rights violations committed by State agents, which have affected the community that expresses itself in a legitimate and authentic way. Unfortunately, among the thousands of people affected, there are several artists and cultural workers.

Since Friday, October 18, we have seen an unexplainable number of human rights violations increase day by day during social demonstrations, in a country that is democratic. To date, the National Institute of Human Rights (Instituto Nacional de Derechos Humanos) has recorded 964 gunshot wounds, 222 eye injuries, 384 court cases, including 273 for torture, 66 for sexual violence and 6 for murder, among other very serious crimes committed by State agents. Citizens have witnessed countless excesses and abuses in the use of force during the mobilizations.

Faced with this, we can only wonder what kind of police officers we have who can go so far as to attack their own fellow citizens? What can justify the use of torture? What is being taught to Carabineros (riflemen – Chilean military police institution) so they proceed with those absolutely unjustified beatings of children, adolescents and older adults?

In whose hands are we? Nothing in what we have seen is pointing to cases of individual excesses, but rather to a coordinated action on the part of law enforcement authorities.

In response to these serious facts, the organizations that convened the Artistic and Cultural Cabildo, and by mandate of the latter, demand the immediate cessation of human rights violations by the Carabineros and a structural reform of this institution that seems to have normalized violence. We demand the resignation of General Mario Rozas, who is directly responsible for these facts and who has not acknowledged the evidence that Chile and the world have unfortunately witnessed: human rights are being violated in our country.

Artists and cultural workers have been and will always be concerned about the defence of human rights, and this time we will continue to demand, by all means at our disposal, that they be respected.