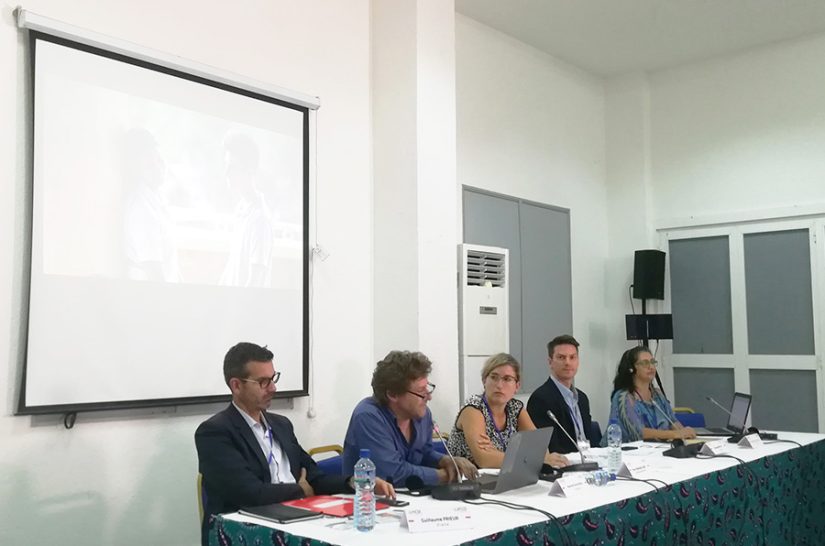 The second day of the Regional Conference “Pan-African Perspectives for the Protection and Promotion of the Diversity of Cultural Expressions” (9 and 10 October 2019) began with a round table discussion on the challenges faced by civil society outside Africa. It brought together several representatives of coalitions for cultural diversity: Guillaume Prieur (French Coalition), Jérôme Payette (Canadian Coalition), Alejandra Diaz (Paraguayan Coalition), Ray Argall (Australian Coalition).

At the European level, coalitions have been mobilized by the issue of the diversity of cultural expressions in the digital environment with several European directives:

The objective of these directives is to regulate digital platforms in favour of creation, to integrate them into the creative economy. The next step, which will be crucial, is the transposition of directives in the Member States. In the future, beyond the regulations obtained, it is also necessary to move towards a regulation of algorithms and artificial intelligence, the objective being to prevent a standardization of cultural creation.

In Canada, the CDCE focuses on two main issues: maintaining the cultural exemption in free trade agreements (obtained during the renegotiation of NAFTA, renamed ACEUM) and the application of Canadian cultural policies in the digital environment. The CDCE produced a brief in January 2019 as part of the review of Canada’s Broadcasting and Telecommunications Acts. There was also significant involvement of CDCE members in the campaign for the October 21, 2019 federal election. The CDCE has also closely followed what has happened in Europe regarding copyright and the AVMS Directive. The CDCE regularly works with researchers, academics, the UNESCO Chair, UQAM. There is a willingness to develop work with the research community on the impacts of artificial intelligence on culture.

At the Paraguayan level, the priority is to reorganize and strengthen the space of confluence between the different artistic sectors. With the new National Secretariat for Culture, there have been changes. In particular, a round table for the performing arts was organised for the first time. Others followed for music, theatre, books, and there is a national cultural plan that is beginning to be discussed. From a broader perspective, South America is facing the wave of the orange economy. Neoliberalism dominates and the economic policies of the countries are similar, with significant budget cuts for culture. The former coalitions of Argentina and Brazil have been weakened by the general dismantling of cultural resources and plans. In Chile, the Chilean coalition succeeded in getting a law passed that ratifies the celebration of the Day of Cultural Diversity on October 20. The Chilean coalition is also working on the preparation of a workshop for officials from the various ministries of the Chilean government to raise awareness of aspects of the 2005 Convention.

There are many organisations very active in the region but it faces significant political challenges and the issue of human rights is a major problem in some countries. China has become a global giant, like the United States, and it is a threat to the diversity of cultural expressions, especially for the smallest territories in the region. The Australian coalition has exchanges with New Zealand and South Korea, including copyright and royalty collection. The defence of copyright is a priority issue for the Australian coalition, which is also interested in the presence and enhancement of local content online, but also in the contribution of platforms and the telecommunications sector to the financing of artistic creation. Among the actions that mobilized civil society, Ray Argall mentioned the “Why make it Australian” campaign to defend the Australian audiovisual industry.

Civil society challenges elsewhere in the world: discussion with representatives of coalitions for cultural diversity