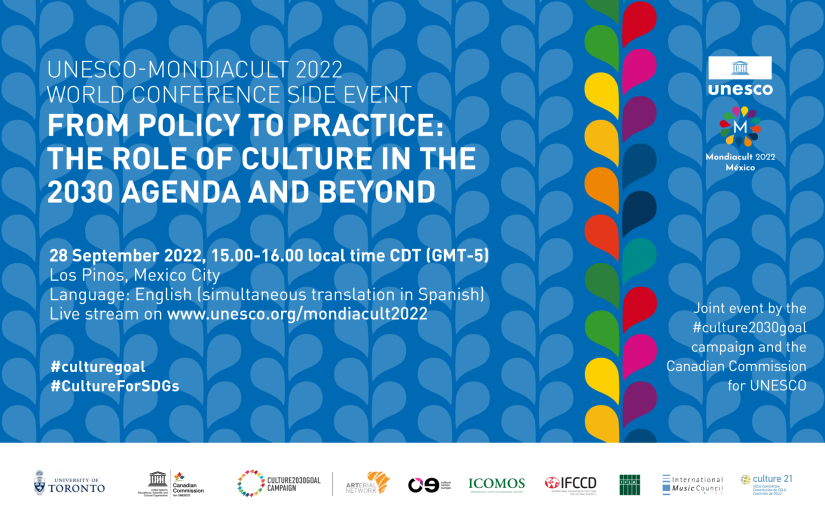 The International Federation of Coalitions for Cultural Diversity (IFCCD) will participate in four events at UNESCO’s MONDIACULT 2022 conference to be held September 28-30, 2022 in Mexico City. One of the objectives of the events will be to support the Culture2030Goal campaign which aims to establish a Goal for Culture in the Sustainable Development Goals (SDGs) adopted by the United Nations in 2015.

U40 Network Mexico: Civil Society Participation in the 2005 UNESCO Convention

Webinar organized by the Mexican civil association Creatividad y Cultura Glocal, Céline de Dianous, Communications and Events Manager of the IFCCD, will speak about the impact of the U40 network in Latin America.

This conference organized by the German Commission for UNESCO will take on the recommendations of a vast international conceptual study “Fair Culture – A Key to Sustainable Development” carried out by the UNESCO Chair for Cultural Diversity at Laval University. The cooperation partners will gather a truly global group of experts at MONDIACULT 2022 to elaborate the concept of “Fair Culture” – adapting Fair Trade principles to cultural and creative sectors. Beat Santschi, President of the IFCCD, and Marie-Julie Desrochers, General Secretary of the IFCCD, will lead a session entitled “Diversity of cultural expressions and cultural value chains in times of Digitization – Implications and new necessities for “Fair Culture””.

A Culture Goal is essential for our common future

This side event organized by the #culture2030goal campaign, of which the IFCCD is a member, will present and discuss a Zero-draft of a future Culture Goal, as prepared by major global cultural networks, working together through the Culture2030Goal campaign. Based on expert inputs and a survey of actors across the field, the draft Goal will allow for a new focus in efforts to ensure that culture takes its place at the heart of development planning. Marie-Julie Desrochers, IFCCD General Secretary, Holly Aylett, Director of the UK Coalition for Cultural Diversity and Luanda Smith, Executive Director of Creatividad y Cultura Glocal A.C., IFCCD member will participate.

From Policy to Practice: The role of culture in the 2030 Agenda and beyond

Co-organized by the Culture 2030 Goal Coalition and the National Commission of Canada, this side event at the MONDIACULT 2022 conference will present two outcomes. On the policy side, a Zero-draft of a future Culture Goal, prepared by major global cultural networks – forming the Culture 2030 Goal Campaign. The draft allows for a new focus to ensure that culture is placed at the heart of development planning. In terms of practice, a new toolkit, developed by a working group convened by the Canadian National Commission for UNESCO, that acts as a practical guide to the SDGs for Cultural Institutions and Organizations in Canada.

These two outcomes will serve as a springboard for a discussion about what objectives cultural policies should include, how to articulate them in the context of a broader development agenda, and how such policies will support cultural actors on a practical level. Marie-Julie Desrochers, General Secretary of the IFCCD, will take part in the meeting.

Nine IFCCD delegates will be present in Mexico City for Mondiacult 2022:

The IFCCD takes part in MONDIACULT 2022